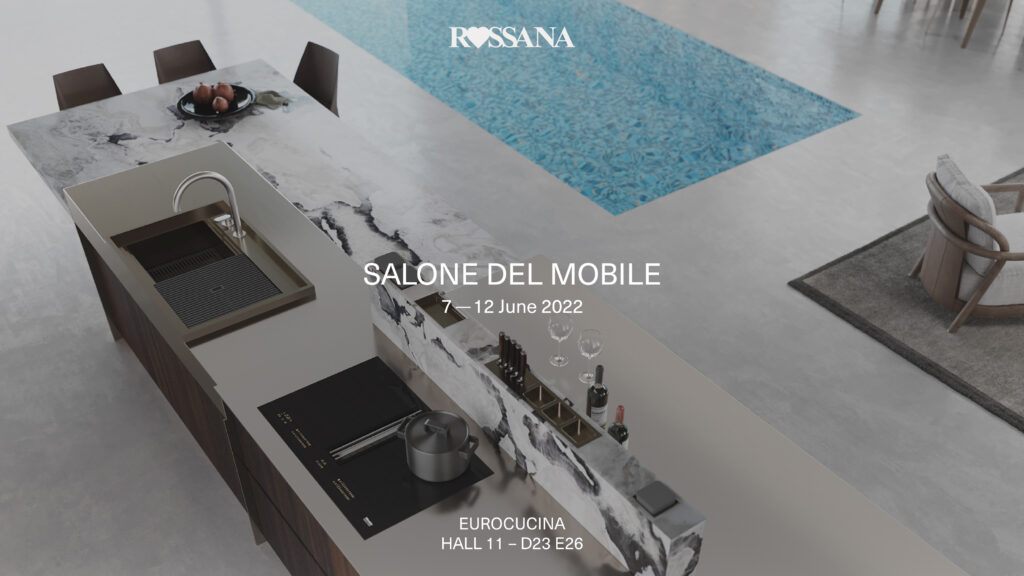 Design, material, design contents. These are the assets which sum up Rossana, the brand in the Colombini Group which has been a pioneer of style, design and technology in kitchen solutions for more than 60 years, and which are being highlighted during this edition of the Salone del Mobile/EuroCucina 2022.

This brand stands out for its research, experimentation with materials and innovative systems which emphasise Rossana’s focus on using material in its pure state. Every single Rossana kitchen constitutes a unique work of contemporary design, made to stand out from the crowd while blending in with its architectural surroundings. Today more than ever before, the kitchen feels and reveals the soul of the home, interpreting and bringing together functionality with style in a harmonious creative dialogue that is fully embraced by Rossana.

The projects on exhibit at the trade fair HD23, ISØLA, HT50, TU23 and DEDALO, are interpreted by Simona Tagliaferri, Art Director of Rossana, and play the starring role in the 23rd edition of EuroCucina in a sophisticated exhibition space spanning just under 200 square metres. In this international setting, Rossana’s kitchen solutions voice the topical dialogue between functional setting and minimal style. The Art Director interpreted the models with a clever combination of materials, surfaces and colours. Bold, solitary elements that create additional accents provide an individual touch and portray a vision of the brand where textured weights communicate with one another with new tales.

The natural strength of wood, stone and metal expresses the harmonious sense of beauty through signs, vein patterns and colour, enhanced by the light. News including Walnut, Larice Silk, Coal Chestnut wood and stones such as Breccia Imperiale green leather, Trinity White leather and Arabescato Orobico leather are just some of the materials used for these projects.

Blocks and voids have been simplified and interpreted to allow the pulsating style energy to roam freely.

For EuroCucina, Rossana has embarked upon a new journey to reinterpret three iconic kitchen models by Massimo Castagna and Carlo Colombo. Pondered gestures in which a rhythm – of pace, breathing, life even – can be calibrated with new tales, those of HD23, ISØLA and HT50.

Character: rationality, ergonomics, functionality and the potential of materials combine with the desire to explore and interpret changing lifestyles.

HD23 expresses an original and innovative design that goes beyond the concept of the kitchen characterised by the door. The base units, very capacious thanks to the low plinth, and the various special components, each with its own specificity and material, make HD23 a functional kitchen, customisable and flexible in interpretation. A dynamic project, constantly in progress that evolves and is enriched with new elements and materials.

HD23 is embellished with special components used as “objects”, each with a strong and specific personality and characterised by a different use of materials such as metals, essences, high resistance lacquers and stones. Extreme rationality, the search for ergonomics, functionality and the potential of materials combine with the desire to explore and interpret changing lifestyles, providing an answer to the new orientations and demands of a sophisticated and demanding user base.

Character: elegant, sculptural and functional, ISØLA reveals an innovative and transversal concept in use and form.

ISØLA reinterprets the disruptive concept of one of the brand’s first ‘island’ models, which revolutionised the market in the late 1960s with its contents.

A model expressed in the form of a monobloc with architectural geometries that reveals an open kitchen ready to dialogue with the surrounding space, capable of adapting to large houses, but also to small flats and metropolitan open spaces.

ISØLA is a kitchen, but also a living room thanks to a clear, central cut that defines the two environments. The new design is characterised by a self-supporting wall that creates an aesthetic and operational division between the washing and preparation area and the living area.

Geometrical lines, developed horizontally and vertically, create an interplay of volumes between solids and voids and reveal ISØLA a sculptural kitchen with an architectural cut, marked in the elevation by metal blades that define the various areas of function and storage, and punctuated in the top by different levels made of different materials. Designed with natural and precious materials, such as wood and stone, skilfully worked and combined with metal elements that emphasise the masterly encounter between materials and geometries, ISØLA reveals Rossana’s DNA, which favours the use of materials in their pure state, inspired by an idea of earth and nature.

ISØLA also proposes an elegant boiserie system with which it is possible to furnish the entire room, including niches and walls, and create a total living look, exclusive and personalised. ISØLA is proposed in five interpretations set in different locations – Ibiza, Milan, Paris, New York and Singapore – where the project takes shape and narrates the brand’s style through beauty and material content.

IBIZA – ISØLA in a double-depth version in which the play of volumes, between solids and voids, creates a sequence of functional zones. The tops of varying thicknesses in a warm Orizzonte steel finish leave room tor the fully fitted partition and the table top in Trinity White stone, with its support in extra clear laminate glass. Vertical steel strips alternate with panels in thermal treated Oak, both on the base elements and on the wall columns.